So I have a ton of concept art to share from MtG's Forgotten Realms concept push. I think I'll start with the class silhouette sheet I worked on. The goal was to make them clear and individual, even without labels.

Alright, one more example character to share from the MtG:AFR concept art push. This time a Dragonborn Paladin.

Shared with permission from WotC. pic.twitter.com/QIjUBXmWUh

Another example character from the MtG:AFR concept art push. This time a Dwarven Cleric!
Shared with permission from Wizards of the Coast. #MTGAFR pic.twitter.com/jVxrwrZwrl

Another one from the MtG:AFR concept art push. This time a gnomish druid.
Shared with permission from Wizards of the Coast. pic.twitter.com/lse90jqZJB

Decades ago, a wizard named Sylvene came to the Sword Coast from another plane of existence called Ravnica. While exploring Waterdeep and nearby lands, she met and fell in love with the father of her child. She built a refuge for them in a small demiplane of her own creation, but eventually she went home to Ravnica with her infant son and never returned.

Now her grandson seeks to recover relics of her power by exploring Sylvene’s history in the Realms—and he doesn’t care who he hurts along the way. The consequences of his careless pillaging already ripple out to impact others.

This Dungeons & Dragons adventure is written to suit four to six characters of 8th level. With this text and the core D&D manuals, you have everything you need to play. The second episode of the #MTGDND adventure is here! Check out this new episode designed for four to six 8th-level players: https://t.co/slJ99l0iMT

There's a story behind this one, more in the last image. #mtg pic.twitter.com/WPtDBXBxpW

I want this with a golden frame behind museum glass 10 feet tall in the cafeteria.

This short Dungeons & Dragons adventure is written to suit four to six characters of 9th level. With this text and the core D&D rulebooks, you have everything you need to play.

A large, grassy hill stands in the High Moors, cracked by some ancient stress. It was thought to be a barrow, once, but it was never meant to be a tomb. It is a vault turned into a prison as punishment for the poor souls who vowed to defend it . . . and failed.

Inside this hill, beneath it, and beyond it, secrets await—secrets that could destroy an artifact of great power, for good or ill. Despite the danger and despite the woe that befell previous trespassers inside the hill, someone must venture inside to learn those secrets. The artifact could already be in the wrong hands.

Decades ago, a powerful wizard from a distant plane of existence came to the Sword Coast as an explorer. Here she adventured as an explorer, toiled in study, and eventually departed with her young son, back to their home plane of Ravnica. She was called Sylvene, and she left behind memories of beloved allies she met and befriended in the lands of the Sword Coast. Many of those memories were celebrated and commemorated with the construction of a grand crypt in a verdant land—where she hid valuable treasures. Now, those treasures attract not only adventures but the attention of her grandson, Tyreus, whose greed for power knows no bounds.

This short Dungeons & Dragons adventure is written to suit four to six characters of 9th level. 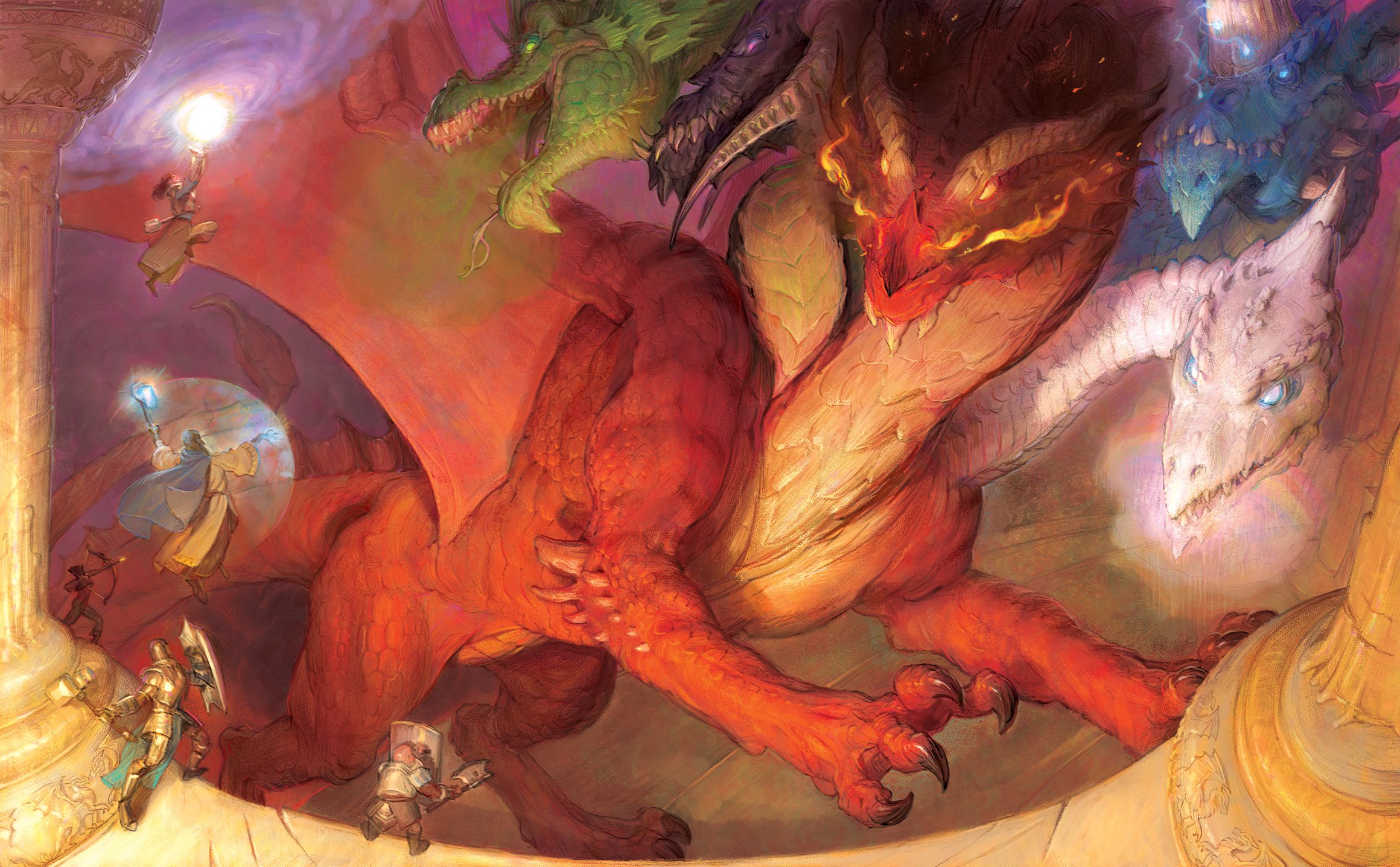 Drawing a dragon head is like drawing a fancy car—there's a lot going on, and it's easy to mess up the perspective. I feel pretty good about how these turned out, but with distance I'm starting to see the flaws. pic.twitter.com/7EumBsNg0h

Oh, I’m only sharing it because I was alerted this morning that Wizards is sharing it themselves. My favorite part of this painting is the white head. I imagined a frost dragon might have a constant fog around her head, and in the right lighting you'd get a rainbow.
That's what happens when you hire children's book illustrators to paint your dragon—pretty rainbows. pic.twitter.com/FwzNKZt5d2

No one who looks at the printed card will ever see that rainbow, of course. Nor will they see the adventurers.
These people are definitely going to die. y other favorite part of the painting is just this section right here. It's funny what you end up latching on to. pic.twitter.com/KeacZvODqo

Anyway: sketches! I sent Wizards of the Coast three rough versions early in the process.
Wizards of the Coast is a company. Not just some coastal wizards. They picked the one I most wanted to do, so that was nice. Here are a few of its steps. pic.twitter.com/xicq1BjPLQ

This portrait of Mordenkainen envelopes so much of what I love about my career as an artist – from portraiture, to narrative storytelling, rendering of reflective surfaces, dramatic lighting effects, and most importantly conveying a sense of wonder and mystery. We may never know what the wizard was working upon as we interrupted his contemplative thoughts in his study, but we can be certain we will feel the wrath of his ire!
Ever since discovering Dungeons and Dragons in my youth, I have enjoyed the complexities, challenges, and excitement of role-playing the character class of wizards. This portrait represents the deep passion I have for gaming and the art creation infused within my youth around roleplaying. It was this wellspring I returned to again and again as this work evolved.
Reaching back deep into those wizardry gaming roots are a set of bookends I created during my hard-core D&D days, with one side a diorama composed with the elements from Grenadier’s ‘Wizard’s Room’ lead figurine miniature set. I loved to paint these miniatures, owning handfuls of the diverse sets produced, and enjoyed endless hours of enjoyment in use in our campaigns.
Due to the lack of access to proper art supplies as a young artist, all small details on these figurines were rendered and applied with sharpened toothpicks. I am happy to state those logistical hurdles are no longer a hinderance in my art creation now! I have long ago learned that proper tools are part of the pathway to creating masterful, professional works of art.